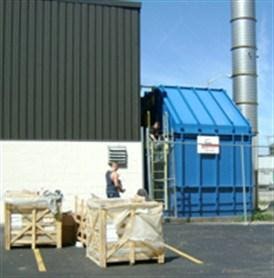 Tekra Corporation has always had an eye on their energy conservation. They are a custom coater of plastic films in Wisconsin where state regulations require over 98% of the Volatile Organic Compounds (VOCs) emitted from their process be destroyed in an oxidizer system. While considering their first oxidizer system, Tekra’s Engineers did their homework and invested in an early model Regenerative Thermal Oxidizer (RTO). While at the time RTOs were not the cheapest oxidizer option capital-wise, Tekra knew that long-term, an RTO was their best choice for reliable air pollution control, lower operating costs, and a smaller carbon footprint. “We have always tried to be a green company,” said Zachary Gernetz, Project Engineer for Tekra.

In 2003, it was time for Tekra to replace their aging RTO system, and they turned to Anguil Environmental Systems out of Milwaukee, WI. The equipment of choice was again an RTO, although Anguil’s RTO had significant advantages over the previous model including: 95% TER (Thermal Energy Recovery), lower horsepower, lower operating temperatures, and better options for turndown and idle modes.

“Tekra went so far as to have us install a small odometer-style meter right on the front of the control panel for the Anguil RTO, showing exactly how many BTUs they were saving over their previous unit,” says Greg Blando, Service Manager for Anguil. Tekra’s focus on achieving better energy efficiency did not end there. With a new nationwide focus on green business practices and energy costs on the rise, they again challenged Anguil to perform even better in 2009. Anguil studied the temperature charts of the RTO system and took air samples during peak VOC loading production runs and determined that the 95% TER of the system could be pushed closer to 97% without creating any adverse high-temperature conditions in the RTO. Thermal Efficiency of an RTO relates to the ceramic media inside of this type of oxidizer which captures and then utilizes energy from combustion to pre-heat the incoming, untreated airstream.

“A two percent improvement in TER may not sound all that impressive,” says Mike Scholz, Project Engineer for Anguil. “But most RTOs out there today were designed to achieve about 95% TER. The natural gas required by those systems is directly tied to that five percent of energy lost. Getting back two of the ‘lost five percent’ is actually a 40% reduction in energy lost. In practical terms, that two percent improvement in TER can translate into 40% less on your RTO natural gas bill.” In addition, the enhanced performance at Tekra put their oxidizer into a self-sustaining mode more often, meaning the fuel value in the VOC-laden exhaust gases are enough to operate the RTO and no auxiliary fuel is needed, hence fewer greenhouse gases emitted.

Because of advances in RTO ceramic heat recovery media, Anguil is routinely able to provide RTO operators like Tekra with a performance upgrade by either adding to the top of existing media beds or at times, replacing the top several layers of existing beds with new extruded ceramic media blocks. “With this type of project, payback is king,” comments Lee Kottke, a manufacturer’s rep for Anguil closely involved in the Tekra relationship. “That’s why it is exciting that Anguil can achieve this level of success with only partial media change-outs. That keeps the project cost down and payback periods very reasonable.”

There are other possible effects on project payback to consider. Deeper media beds may require the relocation of chamber instrumentation – like thermocouples. Also, higher efficiency media styles can come with increased back pressure and electrical horsepower cost. Often, however, as in the case of Tekra’s RTO, the electrical penalty is minor compared to the natural gas savings.

Gernetz said that with two coaters running a variety of coating weights and line speeds, it is difficult to get an exact dollar savings. However, prior to the media replacement their RTO often required natural gas to maintain temperature when only treating the exhausts from one coating line. Post retrofit, “the RTO rarely requires natural gas even when only one coater is operating and never when both are on,” says Gernetz. Zach added, “Jobs that were never self-sustaining before are now, so I know that the media retrofit is saving us money.” He estimates a two year payback for this retrofit.

Considering some enhancements to your RTO?  Think about this:

According to Chris Anguil, President of Anguil Environmental Systems, Inc, “When I reflect on the relationship between Anguil and Tekra, it strikes me how RTOs, while such a huge leap forward in energy efficiency over previous oxidizer styles, are continuing to evolve. Advances in media and controls mean there is still room for efficiency improvements on any RTO system out there,  regardless of age. Anyone owning an RTO should follow Tekra’s lead and continue to ask if they can do even better energy efficiency-wise. We applaud Tekra’s commitment to environmental compliance and energy efficiency and thank them for challenging us with this opportunity.”