Comments Off on Stainless Steel RTOs for Ethanol Emissions and Odors A 42 million gallon expansion at an ethanol production plant in the Midwest was certain to put the dry mill out of compliance for emissions such as Hazardous Air Pollutants (HAPs), Volatile Organic Compounds (VOCs), carbon monoxide (CO), nitrogen oxides (NOx), and particulate matter (PM). In general, ethanol production facilities in the United States are permitted to operate under a ‘minor source’ status as long as the total tonnage of key pollutants are below the 100 tons (named sources) or 250 tons (non-named sources) per year limit. However operating restrictions, penalties and fines, as well as community pressures are forcing many plants to strive for the lowest possible emission levels, enabling future capacity expansions.

In an effort to reduce the world’s dependence on fossil fuels, there has been a major push towards alternatives. Ethanol has been at the forefront of this movement because it reduces greenhouse gas emissions from automobiles and its production has a positive net energy balance. The homegrown fuel also reduces the need for imported oil from sometimes unfriendly and unreliable supplier nations.

Ethanol is produced by fermenting and distilling starch, creating a 200-proof alcohol suitable for combustion in a vehicle. When processing corn, only 70 percent of the kernel is made into ethanol; the remaining fats, proteins, fiber, oils and minerals are referred to as distiller’s grain (DG). If a production plant is not very proximate to dairy operations or other significant livestock feeding needs, it will have to dry the DG in order to prevent spoilage during transport to more distant regional markets. Operating restrictions, penalties and fines, as well as community pressures, are forcing many plants to strive for the lowest possible emission levels from their dryers, enabling future capacity expansions.

Since air permits are granted on a facility-wide basis, when developing, designing and permitting ethanol production facilities, selecting the most appropriate process equipment as well as air pollution control equipment is critical. Some unique DG dryer designs are steam-heated or compressed air-based, but the vast majority of installed dryers are heated with natural gas. Regardless of the dryer type, volatile organic compounds (VOCs), odors and aerosols are emitted from the drying activity. By far the most commonly installed technology for this critical emissions source is some form of efficient thermal oxidation. Most of the major ethanol design firms incorporate thermal oxidation of this exhaust stream into their plant designs, and most state air permitting agencies require it. Selecting a dryer technology and its corresponding pollution control equipment often is the underlying decision for determining air permitting major source status. Prevention of significant deterioration (PSD) thresholds are now 250 tons per year (tpy) per pollutant facility-wide, since the EPA changed its interpretation of PSD rules for ethanol plants, in 72 FR 24060, on May 1, 2007.

In some non-corn-belt areas of the country where ethanol plants are now being proposed, such as those in ozone non-attainment areas or transport regions, major source thresholds are as low as 50 or even 25 tpy of VOCs to trigger non-attainment New Source Review (NNSR) permitting. When combustion emissions from boilers, emergency generators, fire water pump engines and load-out flares are added to those from the dryer and thermal oxidizer, one can envision why these decisions are critical.

NNSR permitting involves determining and installing the lowest achievable emissions rate (LAER), control technology, obtaining emissions offsets, and analysis of alternatives for the entire development project. PSD permitting involves dispersion modeling, best-available control technology (BACT) determination and commitment, and other impact analyses. Both NNSR and PSD permitting involve additional expense and longer permitting timelines, neither of which finds fondness with ethanol developers. Efficient, properly tuned thermal oxidizers are generally considered to meet BACT and LAER requirements, but there is surprisingly little history in the EPA’s RACT/BACT/LAER Clearinghouse database[1], since most ethanol developers to date have sought to avoid NNSR and PSD permitting by maintaining emissions below the threshold levels.

Some ethanol facilities in the upper Midwest were originally constructed without thermal oxidizers. However, odor complaints and EPA consent orders forced the installation of oxidizers, and hence some form of thermal oxidation is now a part of any new ethanol plant design involving a dryer. Certain plants with solid fuel boilers (often major sources) may vent the dryer exhaust into the boiler for thermal destruction. Others may recover some energy from direct-fired thermal oxidizers by generating steam.

In general, the following two technology solutions have been considered preferred for the ethanol plant DG dryer emission control:

A natural gas RTO may have the highest efficiency, the lowest emissions and a lower total installation cost versus other options. A natural gas RTO may allow a larger capacity plant to be constructed (greater than 100 MGY) while remaining a minor source, but most other options will trigger major source permitting. Trade-offs are between capital expenditures and operating expenses, as well as a shorter timeline to construction, versus potential future competitive advantages. A good natural gas supply deal is a must, with some portion of the net input reserved for hedging on the spot market.

According to the Department of Energy’s Argonne National Laboratory, ethanol-blended fuels reduced CO2-equivalent greenhouse gas emissions by 7.8 million tons in 2005, which had the equivalent effect of removing the annual greenhouse gas emissions of over 1 million automobiles from the road. Many agree that ethanol is a cleaner-burning fuel than gasoline. With state-of-the-art control technology in place at ethanol plants, it can be ensured that production does not counteract the positive impact of this alternative fuel. 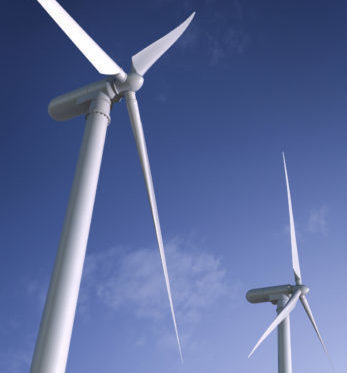 When you think about generating electricity from wind, clean energy comes to mind. However, the wind turbine production process can be a major source of air pollution without the proper controls in place. Manufacturing and painting the blades, towers, and nacelles requires composite construction material and solvent-based coatings. The potential to emit Volatile Organic Compounds (VOCs) and Hazardous Air Pollutants (HAPs) such as xylene, ethyl benzene, styrene, and phenol into the atmosphere is a major concern for communities and regulatory agencies.

One of the world’s largest turbine manufacturers is doing their part to keep wind power a truly clean source of energy. With the expansion of several new production lines, the company enlisted help from Anguil Environmental Systems to ensure proper air pollution control from their component painting processes in The United States. Approximately 40,000 SCFM (64,200 Nm3/hr) of solvent-laden air is diverted from multiple paint booths to an Anguil Regenerative Thermal Oxidizer (RTO), which destroys over 99% of the air pollutants. Similar to the RTO shown here, this system incorporates pre-filters to stop overspray from plugging the oxidizer ceramic media. Designed for 95% thermal efficiency, the Anguil RTO can self-sustain at low concentration levels, which reduces the need for auxiliary fuel.

Demand for renewable energy is on the rise, and experts predict that 70 to 80 new wind turbine blade factories could come online throughout the world in the next decade. With multiple systems on applications such as this, Anguil’s experience makes them the preferred vendor for emission control systems in the wind turbine market.